2015 marks the 50th anniversary of Princess Yachts International, one of the world’s leading motor yacht manufacturers.

Founded in 1965 as Marine Projects (Plymouth), David King and two friends started the business with a Senior 31 hull and deck moulding to fit out in their rented shed based at Newport Street, Plymouth.

Project 31 (pictured) sold for £3,400 and marked the beginning of a successful Plymouth shipyard. Over the years, Princess Yachts has produced some world-beating craft from the company’s first sports boat; the 286 Riviera which firmly cemented Marine Projects’ place in the high speed sports cruiser market, to the Princess 65 which became the company’s flagship in 1990.

On 1st August 2001 Marine Projects became Princess Yachts International plc now occupying sites in Devonport, Plympton and Lee Mill. In 2008 the company was purchased by L Capital and the following year South Yard, a 15 acre waterside site (formally part of the Royal Naval Dockyard) was acquired with plans put in place to take the brand over the 100 foot mark.

Now with over 2,400 employees across six sites, Princess Yachts International is one of the biggest employers in the South West. Along with a complex distributor network covering more than 65 countries around the world and a product range consisting of 23 models; Princess has become a leading motor yacht manufacturer at the forefront of the industry.

Princess Yachts is set to make 2015 a memorable year with the launch of two new M Class superyachts. The Princess 30M will mark the entry point into M Class with the 35M reaffirming Princess’ ability to produce world-class superyachts. As with all M Class yachts the 30M and 35M will combine elegant lines with sophisticated and contemporary interior styling. 2015 will also see further announcements to Princess’ Flybridge, V Class and S Class ranges. 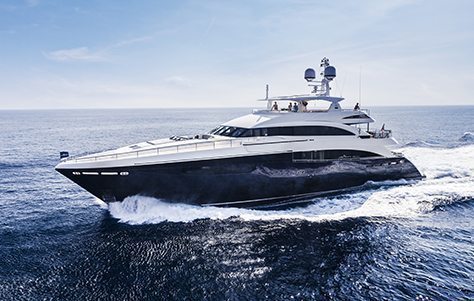