When the V Class was first introduced to the fleet back in 1994, Princess already had a defining heritage in flybridge-equipped motoryachts that dated back 20 years. With the arrival of the original Princess V39 and V52, both models therefore immediately had a key role to play. In the absence of the additional bulk, increased weight and extra windage incurred by a third deck, it was necessary for the new Princess ‘Sports Yacht’ to offer premium performance – and by putting pace, handling and sea-keeping prowess at the heart of the V Class experience, that’s exactly what the new product line delivered.

It would expand over the years, with the Princess V65 in 2000, the Princess V70 in 2004 and the V78 in 2009, plus various MKII and MKIII models along the way, but at no point did it lose focus, either of its model range or of the core principles that defined its early designs – and the modern V-Class fleet presents ample proof of that. Even 26 years on, it retains a striking resemblance to the V Class line-up of the past, with six yachts from 40 to 78 feet and a very firm emphasis on style, handling and performance. Certainly, the development of vacuum infusion and the streamlining of production processes in line with the company’s commercial growth has enabled Princess to increase internal volumes and progressively upgrade the ergonomics of the living spaces. But it has also made each craft lighter, stronger, faster and more efficient, keeping driving dynamics at the heart of the V Class experience.

As regards each of the specific V Class models, it’s interesting to note that, while Princess has been busy in the last couple of years introducing debut models for the all-new X Class and R Class product lines, it has still found the capacity to dedicate some serious attention to the V Class. In fact, it’s fair to argue that, with a new Princess V40 in 2017 a new Princess V50, Princess V60 and Princess V65 in 2018 and a new Princess V55 and V78 in 2019, the entire product line now delivers a degree of technical and stylistic continuity that makes it more complete and more convincing than at any point in its history. 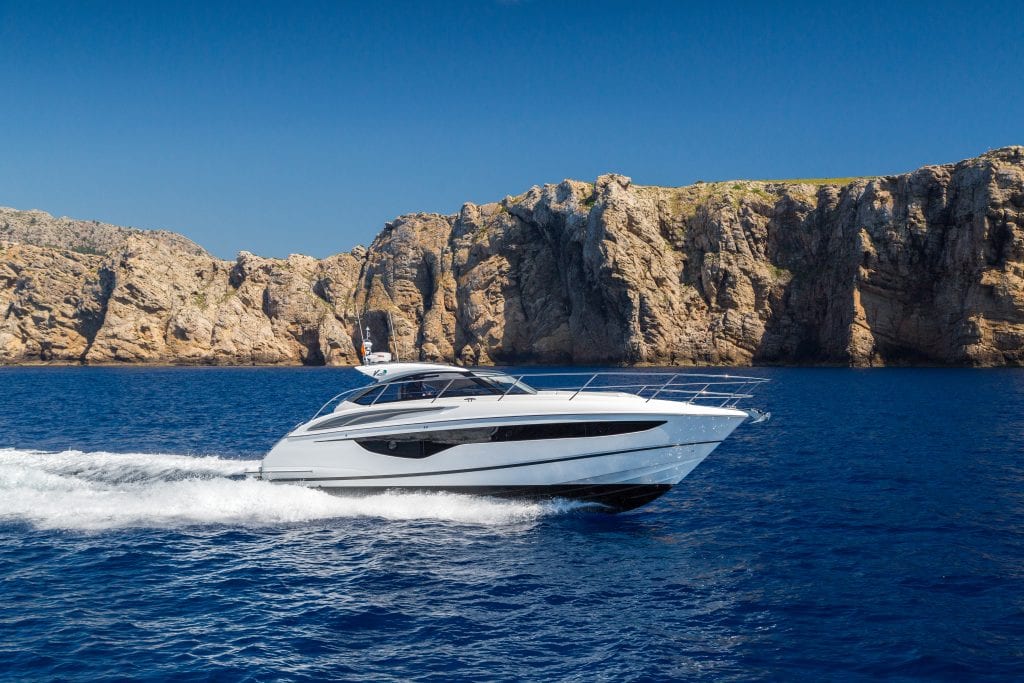 The smallest V Class model is a vital boat in a very competitive sector and the early signs have been very positive. While its predecessor, the V39, won 2013 ‘Motorboat of the Year’ in the ‘Sports Cruiser up to 45 Feet’ category, the launch of the new V40 immediately saw it take victory in the same category at the Asia Boating Awards in Singapore. Equipped with twin Volvo Penta D6 340s for speeds approaching 40 knots, it features a sheltered cockpit dining station opposite a starboard wetbar with the option of a convertible stern bench for easy sunbathing aft. Down below, the master cabin in the bow is supplemented with a bright, full-beam twin; and the central saloon comes with a galley and a U-shaped diner that converts to a double berth for extra guests.

While the external aesthetic of the Princess V50 reaffirms the bloodline it shares with the V40, the larger boat adds a pair of spacious ensuite double cabins, a more generous saloon that can also be specced as a third double cabin and the option of either an enclosed or an open configuration. In the former case, the main deck is split 50:50 between largely symmetrical inside and outside seating areas; and in the latter case, that openness is taken to quite a radical degree, courtesy of a huge canvas sunroof and a three-man starboard sun bed that extends the living space way out to the electro-hydraulic swim platform. In spite of its sporting ability, it remains one of the most flexible family cruising machines on the modern market. 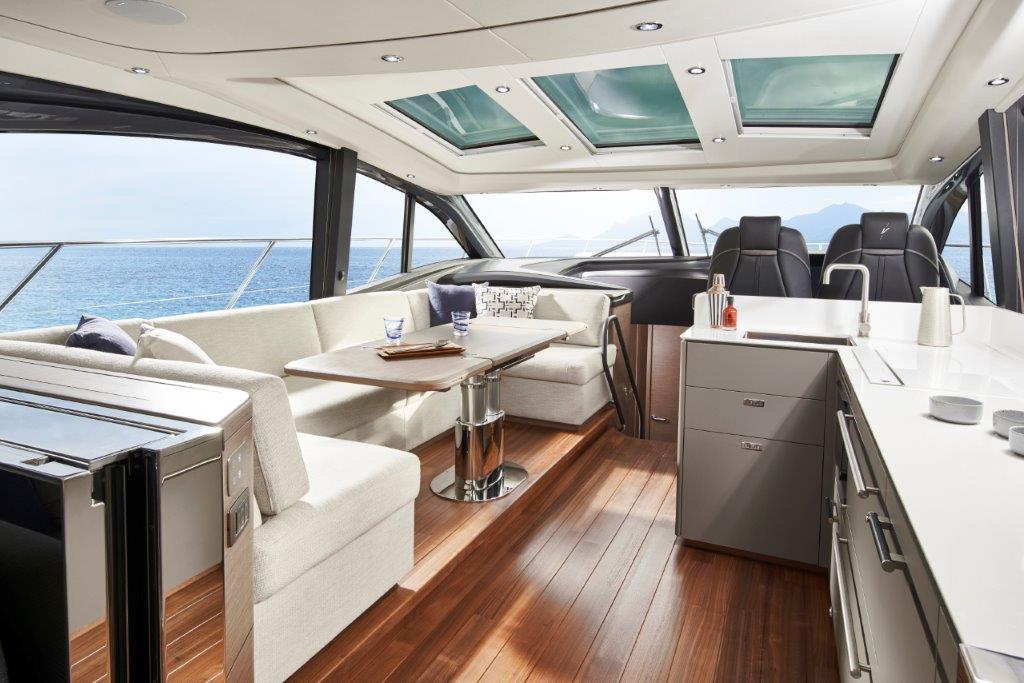 The main deck of the Princess V55 is clearly optimised for open boating. In the aft cockpit, the clever incorporation of the aft bench into the leading edge of the central sun lounger preserves generous external dining capacity while retaining easy freedom of movement and delivering the space beneath for a 3.45m tender garage. The partition between the aft deck and internal saloon can be all but eradicated courtesy of a drop-down patio door; and the wide-open main deck day spaces are bolstered by a foredeck seating and sunbathing zone. Down below, a full-beam ensuite master stateroom is supplemented with a double guest cabin with optional scissor berths, an additional port bathroom, a bunk cabin to starboard and an optional aft cabin for crew. And yet, as a V Class yacht, she balances her versatile main deck and seven-berth accommodation with some serious sporting credentials. Equipped with a pair of Volvo D13 1000s, you can expect a top end of around 37 knots. 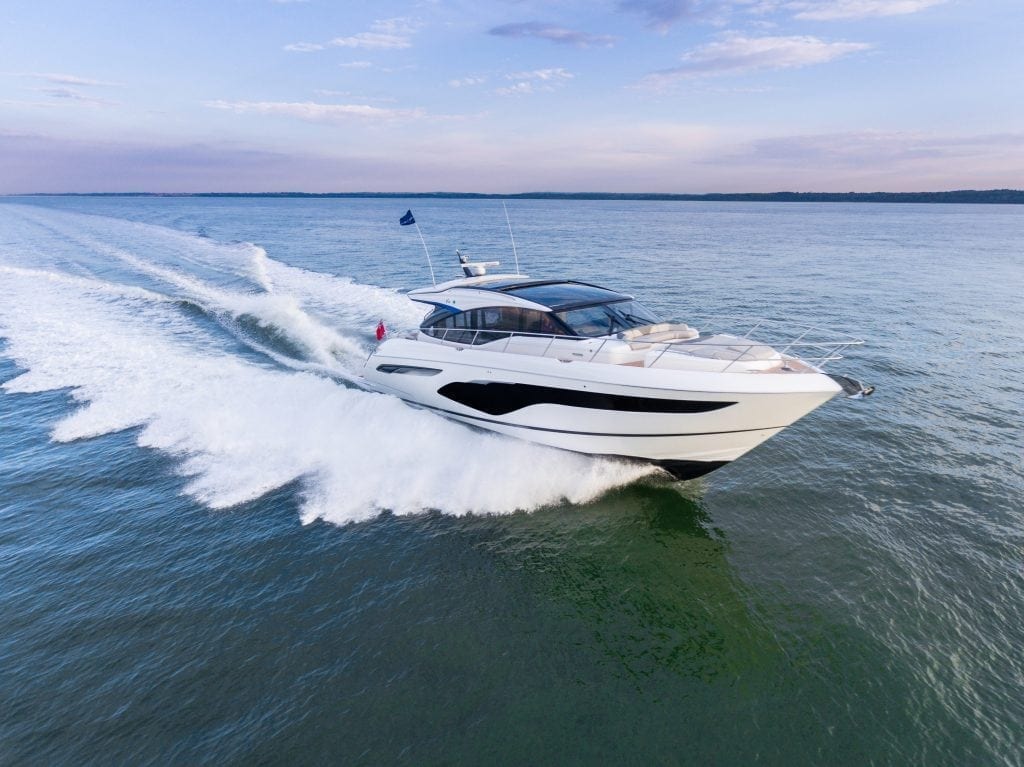 Like the smaller boats in the line, the V60’s use of cleverly retracting windows, doors and sunroofs enables you to enjoy protection when you need it and an open boating experience when you don’t. Powered by a pair of MAN V8 1200 engines, the 38-knot V60 is built to carry six guests in three large cabins – a full-beam stateroom, a guest double, a starboard twin and optional aft accommodation for crew. On the main deck, the two-level saloon comes with a casual seating area on the upper tier adjacent to the helm station, and a dining zone opposite a C-shaped galley on the lower tier. With the doors and windows opened, the aft galley integrates neatly with the central seating area of the external cockpit and the galley itself extends into the outdoor space by means of a fully equipped wet bar. 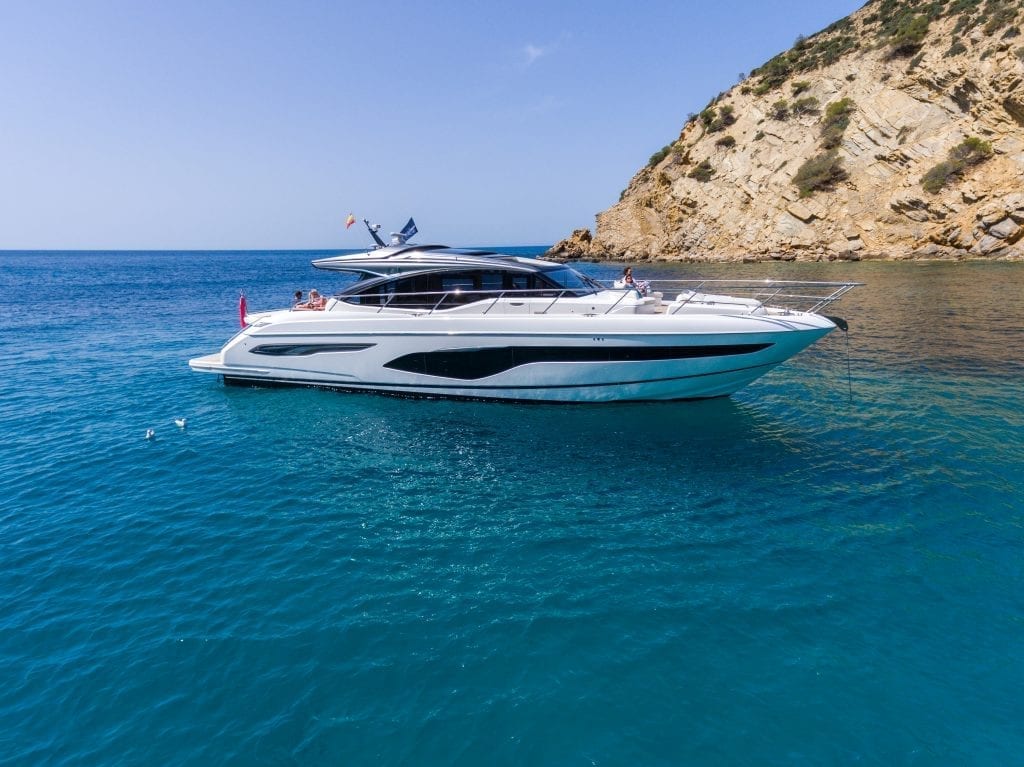 On the main deck, the Princess V65 employs precisely the same layout principles as the V60, but scaled up to impressive effect. In particular there’s some useful extra space in the relaxed lounging area of the saloon’s upper tier, as well as in both the fore and aft sunbathing spaces. To preserve flexibility, the saloon can operate either as a climate-controlled sanctuary from the elements or it can be opened up via a vast sunroof and triple sliding doors. Down below, the Princess V65 adds a large transverse ensuite bathroom to distance the full-beam master cabin from the engine room; and it also expands sleeping capacity with the addition of a fourth cabin to port. Each of the cabins is bright and modern with plenty of light ingress from that trademark V Class hull windows. And while twin MAN V12-1400s will achieve around 38 knots, it’s her cruising efficiency as much as her outright performance that sets the Princess V65 apart. 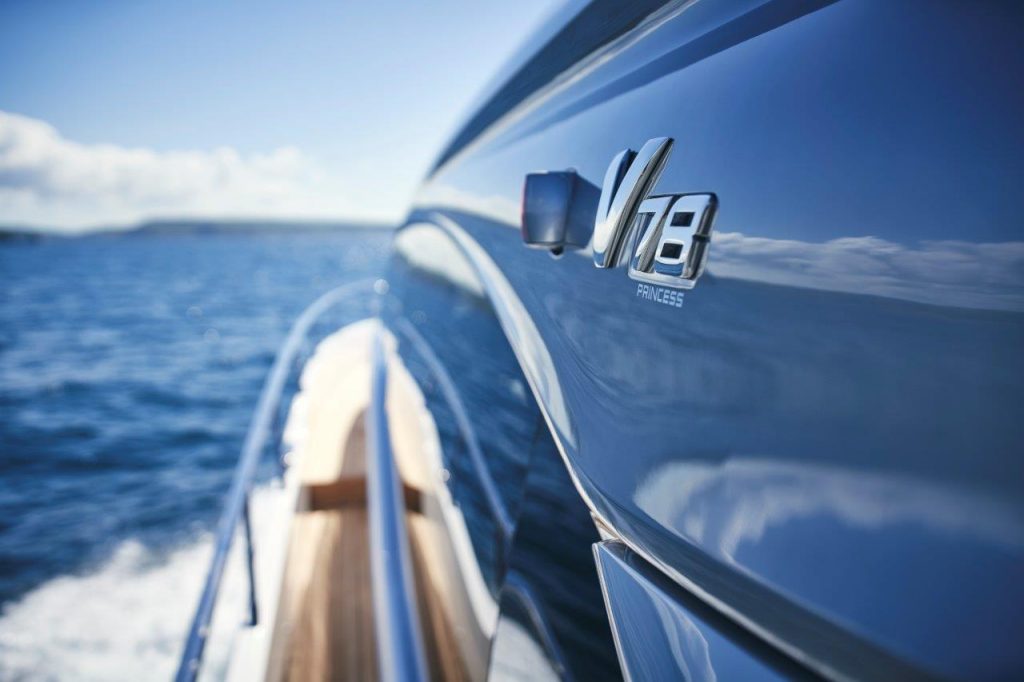 Even in the context of Princess’s current fleet, the V78 is a remarkable piece of work. On the main deck, the vast single-level saloon space comes with an aft galley and a selection of seating areas; and there’s also a superbly sociable arrangement for the helm, with an elevated L-shaped lounge seat to port, in the lee of the screen. 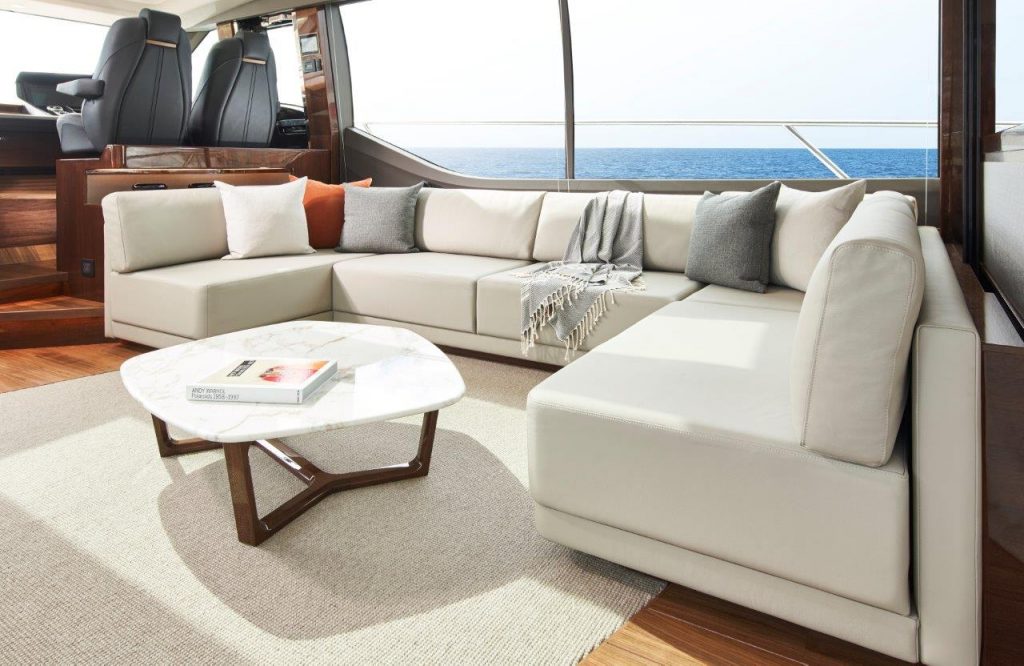 To further enhance sociability, the foredeck entertainment zone uses sunpads that can be converted to create aft-facing seats – and on the configurable aft deck, a central walkway with double sunpads and twin seating units on deck runners enables the furniture to be reconfigured for whatever kind of party the day demands. Down below, the master stateroom benefits from its own private staircase and there are three additional ensuite cabins, plus a twin crew cabin aft. And yet, despite the scale of the V78, this new flagship of the acclaimed V Class fleet does ample justice to the sporting prowess of her forebears with twin MAN V12-1900s for a remarkable top end of 39 knots.

There are a range of Princess V Class models now available for immediate delivery. Details and specifications can be found at www.princess.co.uk/class/immediate-delivery