On England’s south coast, between the mainland and the Isle of Wight, the Solent is one of the world’s most famous yachting playgrounds. Running from Hurst Castle in the west to the Palmerstone forts in the east, it combines bustling nautical cities like Southampton and historic nautical towns like Cowes with quaint estuaries, multifaceted rivers and a range of delightful villages, bays, beaches and anchorages. If you head west, beyond the famous Needles, the Solent provides easy access to the vast natural harbour at Poole, with glamorous Sandbanks and beautiful Studland Bay. And further to the east, the resolutely naval city of Portsmouth delivers a spectacular harbour as well as excellent cruising among the sheltered waters, pretty towns and national trust landscapes on either side of Hayling Island. In short, whether you’re heading to the south coast to buy a luxury yacht, to embrace a nautical event, to soak in the history of the place or to lose yourself among its fabled cruising grounds, the Solent is one of the most satisfying cruising destinations you will ever visit.

As a region with an extraordinary sailing heritage, a variety of historic nautical destinations and a range of sailing conditions, from soft and sheltered to exposed and open, the Solent’s annual calendar of races and regattas is unlike anywhere else in the world – and one of its undisputed highlights is Cowes Week. Having been in existence since 1826, it is one of the UK’s longest running and most successful sporting events. It stages up to 40 races per day for around 1,000 boats and is the largest sailing regatta of its kind in the world.

If you prefer a show to a regatta, the Southampton Boat Show is a traditional outdoor event with the largest on-water display of boats in the whole of Europe and an infectious festival buzz that has seen it become the UK’s favourite boat show and a traditional end-of-season celebration of all that is good about the marine industry. While the Solent also hosts plenty of smaller regional shows, music festivals, fireworks displays and sailing and powerboat races, the Round the Island Race in July is also something special. First held in 1931, it now sees more than 1,500 boats and 16,000 sailors dash around the Isle of Wight in a range of boats from cutting-edge race machines to elegant classics, creating one of the greatest yachting spectacles anywhere in the world.

The British Motor Yacht Show is another keenly anticipated event. Held in June at Premier’s Swanwick Marina, one of the most picturesque marinas on the River Hamble, this unique invitation-only event is designed to showcase the best of British motor yachts, while also enabling premium builders to exhibit their finest new boats to serious buyers. Entirely focused on the ownership of high-end motor yachts and powerboats, with seasoned experts on hand to advise visitors on every last aspect of boat ownership, the 2021 exhibitors list is impressive. It includes first-class UK builders like Princess Yachts, Sunseeker and Fairline. It also includes major names like Argo Yachting, Beneteau, Bayliner and Bavaria Yachts, plus a range of premium service providers like Pantaenius and Seven Star and some class-leading tender builders like SUR Marine and Williams Jet Tenders. Visit The British Motor Yacht Show for more. 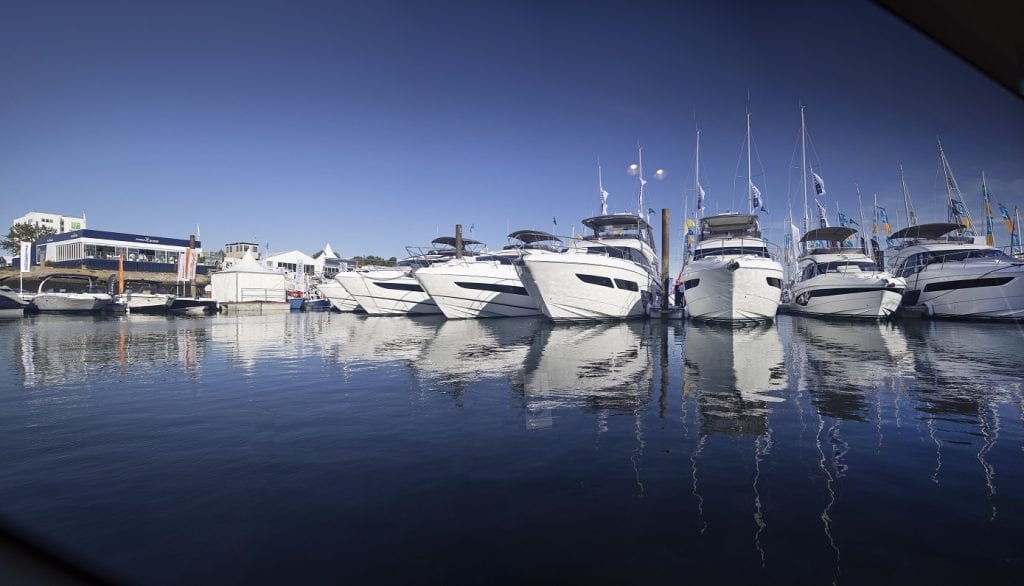 The Solent: where to go cruising

The Solent provides such a generous mix of lively sailing towns and idyllic natural retreats that it can be very hard to narrow down a favoured cruising itinerary. But with its position at the northern tip of the Isle of Wight, right at the heart of the Solent, the iconic yachting hub of Cowes is the saltiest of salty destinations and a very natural base for exploring the local highlights. Further west, Lymington is another intensely nautical town with scores of pubs, cafes, fish restaurants and chandleries. And back across the water, Yarmouth is a lively old fishing village at the mouth of the River Yar, with easy access to cliff-top walks and pretty bays as well as an impressive castle and a selection of pubs that come alive in season, with visiting yachtsmen drinking beer and discussing their nautical exploits.

If you enjoy the idea of joining the throng, the Hamble River, near the entrance to Southampton Water, is an elegant, usefully sheltered waterway with seven marinas, a range of lovely towns, villages and sailing pubs and countless sailing clubs. If you prefer a quieter, more intimate escape, the Beaulieu River, which cuts up into the New Forest National Park on the mainland’s south coast, combines its natural loveliness with a fascinating shipbuilding heritage. The village of Beaulieu itself plays host to Palace House and the British National Motor Museum – and for marine historians, the beautifully preserved Buckler’s Hard Maritime Museum, half way up the river, presents a memorably tactile snapshot of a bygone age of British shipbuilding.

Newtown Creek is also a lovely place to stop. As a secluded estuary owned by the National Trust on the northwest coast of the Isle of Wight, it’s a great place to enjoy a tranquil anchorage among the abundant wildlife of the historic salt marshes. If you want an equally pleasant stop on the north-eastern side, the tidal estuary of Wootton Creek, between Cowes and Ryde, makes another enjoyable diversion. Back out toward the Needles, Alum Bay and Freshwater Bay also offer lovely opportunities for a scenic anchorage – and if you want to step ashore for a bite, the Hut at Colwell Bay is a renowned beach restaurant that will happily ferry you ashore from your anchorage.

The Solent: where to buy a boat

Princess Motor Yacht Sales enjoys a deep-rooted presence among the Solent’s vibrant south coast boating scene. In addition to a well-established sales office at Swanwick Marina on the Hamble and a full-scale service centre at Saxon Wharf on the River Itchen, Princess Motor Yacht Sales also has a new office in Ocean Village Marina at the heart of Southampton, with easy access to Southampton Water. Specialising in new and pre-owned boat sales, brokerage and shared ownership, the Ocean Village Princess Motor Yacht Sales sales team is based alongside its sister company, Argo Yachting, enabling it to deliver outstanding yacht management services, as well as an outstanding range of boats.