I grew up in St Ives in Cornwall. Dad was part of the lifeboat crew so my brother and I grew up around boats. But having left Cornwall for work, it wasn’t until the age of about 42 that the urge to be on the water returned. We bought our first boat in 2008 – a Jeanneau Merry Fisher 625, which we launched and recovered all around the south west and South Wales. And after the novelty of trailer boating wore off, we relocated to a Dry Stack in Plymouth, before upgrading to a Prestige 34s and then to a Prestige 390s.

Why did you pick Princess Yachts?

We’ve kept our boats at King Point Marina in Plymouth for a long time and, as one of the sites Princess uses to finish and commission its boats, you see a lot of them in the marina. I’ve always enjoyed walking the pontoons, looking over the various boats of a summer evening – so Princess is very much the home team and I’ve had an ambition to own one for many years.

Why did you choose the Princess F50?

My brother and I narrowed it down to a Prestige 520 Flybridge, a Princess V50 and a Princess F50. Personally, I would have gone for the V50 because it’s one of the most beautiful boats out there. But when my wife and daughter saw the F50, there was no contest. They loved the ‘galley-up’ arrangement for the wide-open views and for the more intimate connection with the social areas of the saloon. They also loved the F50’s three-cabin arrangement and the extra deck space provided by the flybridge. So, it was the women in the family who had the casting vote! 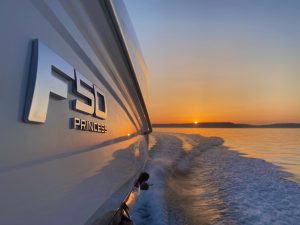 How has it performed?

It’s been fantastic. Having gone from 39 to 50 feet, it’s amazing how the modern design really maximises the volume. On previous boats, my wife wasn’t all that keen to sleep on board but she absolutely loves the full-beam master cabin on the F50. The IPS pod drive system has also been amazing. It feels almost like it’s reading your mind – and my brother and daughter love it every bit as much as I do. Beyond the space and the controllability though, it’s just the quality. I love quality. I want to see it in the fixtures, the fittings, the furniture. I want to see it everywhere and Princess is as good as it gets.

What was your yachting highlight of 2021?

For me, having guests on board is one of the major joys of having a boat – and since we took delivery in June 2021, the guest count is already in the mid-30s. We’ve had a couple of wonderful trips to Fowey and a couple to Salcombe – and another great moment was when we anchored off Whitsand Bay as the sun went down. We’ve seen a humpback whale not far from Plymouth, which was fantastic, and we’ve also seen feeding tuna, as well as dolphins. These are experiences you just can’t buy and we’ve enjoyed them all together as a family. It’s already enriched our lives in so many ways, I will never regret a single penny.

What are your cruising plans for the future?

Getting back to St Ives would be superb and the Isles of Scilly are also on our to-do list. But the south west is our home and to be honest, there’s nowhere else we want to be. When we drive down after work on a Friday, it’s far enough away that it feels like a proper trip but it’s not so remote that it’s impractical. And we’ve got some of the world’s most iconic boating destinations like Salcombe and Dartmouth right on our doorstep. What could be better than that?

Find out more about the Princess F50.