With storm clouds gathered over Plymouth, we took the opportunity to gain a true insight into the seakeeping ability of the award-winning Princess Yachts Y72.

The Y72 is indeed a big boat, at 71ft 5in (21.8m) and nearly 52 tonnes half-loaded it is both physically larger and heavier than the F70 it replaces.  Somehow, it feels even larger than the bare numbers suggest when you’re on board and despite being the smallest model in the Yacht range it feels more of a scaled down motoryacht than a large flybridge cruiser.  It’s a handsome thing, too, imbued with classic Olesinski lines, but breathed on by Pininfarina, with curves in all the right places.

The call was made to head to the mouth of the River Yealm, which offered a decent burst towards the east with the worst of the swell nibbling out our hindquarters.

From the magnificent perch that is the Y72’s upper helm, the boat, spurred on by the might of twin MAN V12s and their 3,3000hp, barrelled through the following swell with almost indecent composure.  Even in these conditions, with waves of 1.5m if not a little more at times, we saw speeds of 30 knots as the hull pushed through the water, sending angel wings of spray shuddering away from the bow.  What’s most impressive is that the Y72 can handle conditions like this in two different ways.  With the fin stabiliser engaged (gyros are an option as well) you can set the throttle back a touch and just let the hull and fins do the work, the former disposing of the lumps with nonchalance as the latter ensures roll is kept to a comfortable minimum.  But, as with every Princess flybridge I’ve tested, the steering dynamics are so good – even on a model of this size – that if you want to hand-steer the boat it’s incredibly rewarding.

The steering is light considering the size of the machine, but this just makes the boat feel so manageable at speed. Upwind, thought the breeze picked up the spray and dashed it across the flybridge at times, the hull felt similarly comfortable with the speed pulled back a touch to around 20 knots.  The difference in ride between our Princess F55 chase boat and the Y72 was marked, as the knowing glances of those of us fortunate enough to be on board the larger boat acknowledged.  The F55 is no slouch at sea, either, but the extra size and displacement of the Y72 made for remarkably serene progress given the sea state.

Things only improve at the lower helm, which is not always the case given you are closer to the waterline and can often feel the bite of the sea state more.  Despite there being twin 24.2-litre V12s mounted in the deck below, the saloon is a seriously hushed place to travel.  The sound levels only just creep over 70db at WOT, which is all the more remarkable considering the conditions. 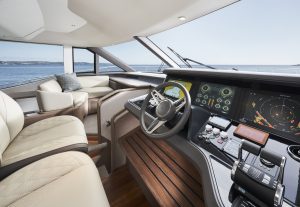 The glass in the saloon is just extraordinary, so much so that there is no real penalty to driving from the lower helm as the view is almost as good as upstairs.  The helm seats, which are a new design, look and feel lovely and have been angled perfectly so that you don’t have to perch on the edge of the base to interact with most of the helm controls.  The MFDs are a little bit of a stretch but the three big screens present boat and navigation data beautifully, including a Bőning boat management system – standard on all Y models – which displays a feast of engine information in superb clarity.

Part of the Y72’s allure is that it will top out at nearly 31 knots but you can also throttle back to displacement speeds, activate the fins and boost the range to cover large distances in comfort.  If you just need to get somewhere or are doing a night passage then the warmth and protection of the lower helm, where you have the boat’s systems at your fingertips and crew can gather around in comfort, would seem the place to do it.

The Y72’s interior is typically demure but the design and layout of the saloon works so well. All the furniture is set at the perfect height to ensure the windows and whatever it is they allow you to look out upon are the stars of the show.  Nothing about the interior feels as if it has been done for show; it’s attractive and beautifully built but clearly designed to be used.  Note how the flooring cleverly segues from timber to carpet amidships so guests can pop inside the saloon without getting the carpet wet, for example, and how easy it is to access the generous under-seat storage.

The aft galley has bars at either end, with the option to have a pair of stools inside so guests can draw up and have a coffee in the morning or something stronger in the evening.  It’s an easy deck to move around because it has not been over furnished and with the dinette located in a useful position opposite the galley, the area amidships is free to be a relaxed lounging space where you get the full benefit of those spectacular windows.  So vast is this space, in fact, it would be good to see a handhold mounted on the ceiling so there is something to steady yourself with when at sea. 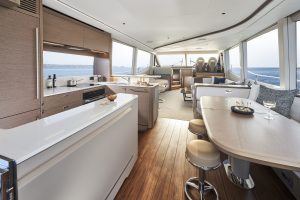 Having a run of seating beneath the windscreen adjacent to the helm is nothing new but Princess has upped its functionality by incorporating a sliding desktop that means you can rest a laptop here and tap away with the best view in the house.

It was the 68, which preceded the F70, which first split access to the owner’s cabin and guest accommodation and that same configuration makes an appearance here as well.  The master suite has a private spiral staircase off to port from the main saloon while guests use the traditional central companionway forward to get to their three cabins.  The layout forward is a familiar one with near identical twins on either side and a double VIP ensuite up front but again it’s the quality and execution that is most noticeable.  There’s a reassuringly expensive look and feel to everything you come into contact with, right down to the top notch fixtures and fittings in the well proportioned bathrooms.

Despite the quality of the other cabins, the master suite still manages to steal the show.  Not everyone will see the sense in gobbling up space in the saloon with a separate stairway to the master but it adds to the sense of occasion, especially as you catch a glimpse of the water through the hull window on the way down.  It is a beautiful cabin and an area that is one of the main beneficiaries of the larger proportions over the F70.  On that boat the ensuite was tucked in a corner at the forward end of the cabin but here the bathroom now runs behind the bed, which creates a much more spacious ensuite but also adds another layer of sound insulation between the main cabin and the din of the machinery space.  On every level it’s an improvement and delivers an ensuite bathroom with twin sinks and a vast separate shower.

All models come as standard with a crew cabin and this is another area that is improved over the he previous model.  It’s genuinely equipped to a standard that could see it being put to use as a spare guest cabin if necessary but, if it is crew who are using it, its helpful the new design incorporates direct access to the lazarette and engine room through a pair of watertight doors, meaning crew members don’t have to go out on to deck to check on the machinery.  There is a deck hatch in the cockpit for quick checks at sea, however.

Princess hasn’t yet succumbed to the beach club trend but there is still some clever stuff going on at the transom.  The hydraulic bathing platform has a weight capacity of 550kg so can carry a decent tender but if the preference would be to keep that clear then the tender can be stowed on the flybridge and winched in and out with a crane.  There is also a hatch above the platform that is designed to stow a pair of Seabobs with charging points so they are ready to go.

The living spaces on deck are palatial, especially the flybridge, which has a ribbon of sunbathing space sweeping down the starboard side with a big wet bar opposite.  Princess has swayed towards a slatted hard top as opposed to a canvas one and, though it’s an optional extra, expect 99% of boats to have it fitted.  It’s a lovely bit of design and as neatly integrated as you could hope a solid top to be on a boat of this size. 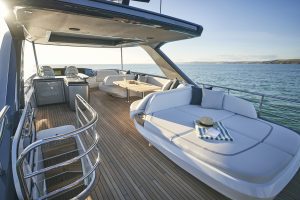 There is only so much you can learn from testing a boat in mill pond conditions – a tea tray with an outboard would be fine when it’s flat.  Testing a boat in the rough opens a window to its character that simply isn’t as easy to find if conditions are too kind.  On this test the Y72 showed that it is far more than just a very nice place to spend time with the sun shining and the anchor out.  No one really wants to go boating in the conditions we face but it’s reassuring to know that if you get caught out and have to knuckle down, the Y72 is up to the challenge.