What’s your boating history and why the Princess F62?

I’ve been well into boats since I was young. We started in smaller dayboats but my Dad got fed up with us dragging it around with water-skis when all he wanted to do was have ten minutes to himself. He decided we needed a boat that would enable him to sit and relax while we went out on the jet RIB – so we made the step up to a pre-owned Princess 52, before selling that to upgrade to our new Princess F62. 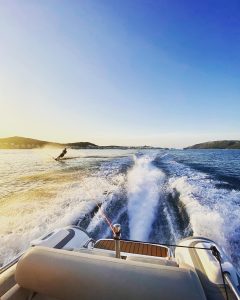 Why did you choose Princess?

We’d been looking at boats around the 19-metre mark from Princess, Sunseeker and Fairline for many years. But the quality and modernity of Princess really stood out. We’re involved in motorsport as a hobby so we’re used to seeing tough, high-quality stuff and we noticed the small things. The switches on the flybridge, for instance, were proper waterproof rocker switches, whereas on the other boats, you’d see regular mainstream switches with waterproof covers. All these little things caught our eye and we thought, ‘Well if they’re doing this on the small stuff, the big stuff that really matters is going to be great quality’.

Why did you select the F62?

We considered the S62 with the smaller sport fly and the sunroof above the lower helm. But because of the weather in Mallorca, we pretty much live on the flybridge so we really wanted the extra space and flexibility of the F62. There’s a big upper dining area and bar, plus a convertible second table for overflow and a master sunbed at the back. When you’ve got ten or 12 people on board, that’s just fantastic. 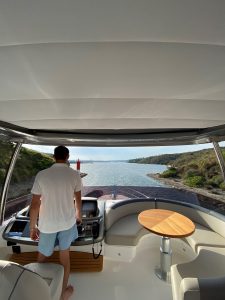 How has it performed?

The biggest thing we’ve noticed is the refinement. You don’t even know the engines are on when you’re in port – and whether you’re sitting at ten knots or cruising at 20 knots, it’s so deadly quiet, you barely even know it’s moving. The fact that we have a gyro means it’s extremely smooth too and that’s a major bonus at anchor, as well as underway.

We also love the space. You can have a whole group of people on board and, while some people are messing around in tenders, others can be sitting downstairs or sleeping at the front, while you’re enjoying a full-on party in the aft cockpit. And actually, the whole aft end is brilliant. When we’re not on the flybridge, we’re usually messing about with the tender so the high-low platform is massive for us. And with the bar area opened up and people making drinks in the aft galley, it’s just a fantastic place to be. 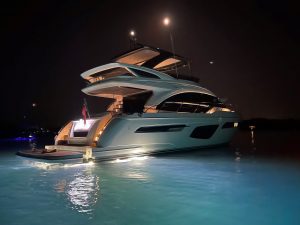 What was your yachting highlight of 2021?

Definitely our week in Ibiza. It was early September so the sea was still warm but the high-season chaos had died down and you could put the boat right in close, exactly where you wanted it. That north side of Ibiza is absolutely stunning, with some great restaurants and anchorages – and what’s really special is that, although we’ve been going to Mallorca for 15 years, when you have the flexibility of a boat like our F62, the things you can see and do are amazing. You see people and places, hidden beaches and wonderful restaurants, that you would never even attempt to get to by car or on foot.

What are your cruising plans for the future?

We want to do a bit more around Menorca and we’ve also talked about getting over to Sardinia and Corsica. We’d probably take it over and leave it there for the summer, so the logistics need a bit of working out, but that’s definitely going to feature in our plans.

Find out more about the Princess F62 on the website