In conversation with Darren Grundy, Director, Shepherds of Windermere

While Shepherds of Windermere has been at the heart of the Cumbrian boating scene for more than a century, its role has certainly changed over the years. Having started out as an independent boat builder in 1900, it gradually transformed into a local boat sales hub – and since the current owner, Darren Grundy, took the reins in 2019, it has gained even greater traction as a nationally renowned boat broker for new and used sports boats, motor cruisers, RIBs and sailing yachts. 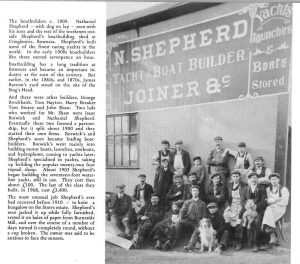 Operating out of the prestigious Windermere Marina Village Complex, Shepherds now sells in excess of 100 boats per year, more than doubling its sales figures for both new and used boats in the last three years alone. And it’s clear that Darren’s background as an avid boater and long-term Shepherd’s client has played a key part in that success, by equipping him to deliver what his customers want.

“We’ve got a 10mph speed limit here on the lake,” said Darren, “so performance isn’t always at the top of the priority list. Instead, people tend to use their boats as sightseeing platforms and holiday homes, so it often comes down to the practicality of the deck arrangement and the quality of the accommodation.” In terms of that deck arrangement, there tends to be a natural divide between flybridge fans and those who prefer a more open-decked saloon. But having added Princess to his fleet in August 2021, Darren is confident that boats like the V40, F45, V50 and F50 are a great way to satisfy his customers in both regards…

“With Princess, you always know that you’re going to get the build quality, the attention to detail and the aftersales care. But what surprises a lot of clients is that, when you put Princess next to the likes of Fairline, Sealine, Beneteau or Cranchi, the pricing is actually surprisingly accessible.” And according to Darren, that accessibility is also something that people love about the historic cruising grounds of Lake Windermere. “You don’t need to worry about the tides or the currents. All you have to do is avoid the red buoys and stick to the speed limit and, with a well chosen boat, you’ve got a home-from-home among some of the boating world’s most spectacular scenery.”

But of course, as a business that has been consciously engineered from the customer perspective, getting things right is about much more than just the hardware. “Whether you’re buying a million-pound Princess or selling a pre-owned £3,000 RIB” explains Darren, “our team will always make sure that you’re made to feel valued. It’s certainly what I wanted as a customer, so as long as I’m at the helm, I will make sure it remains at the very heart of everything we do.”

Find out more about the Princess Motor Yacht Sales distributor in the Lake District online or call +44 (0)1539 446004 or email info@shepherdswindermere.co.uk